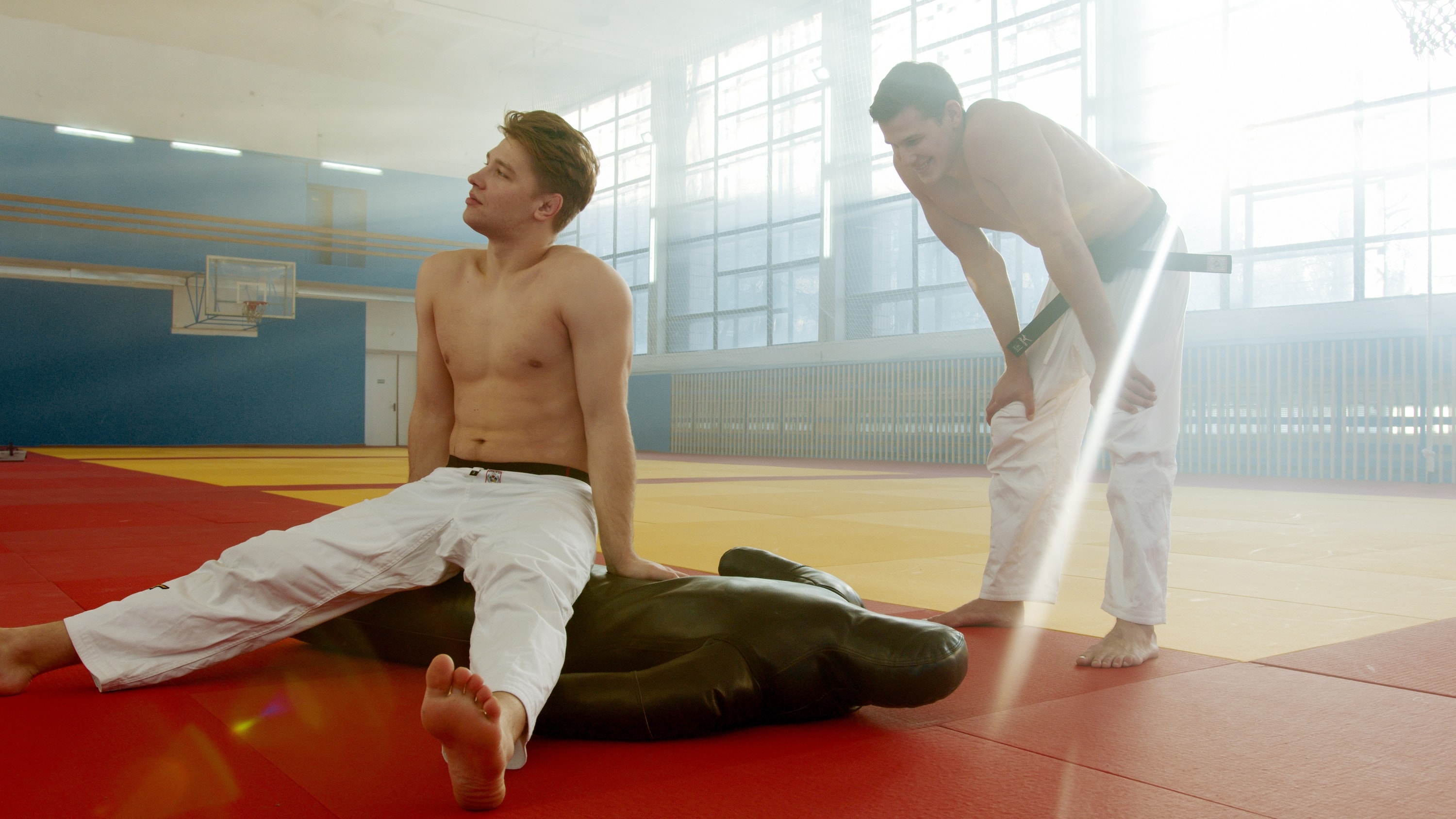 Hello, and welcome new and old members, to a new semester!

A lot of exciting is happening this fall:

The practise start up will be monday 30th of august. Practises will continue: Mondays and thursdays 19:30-21:00. Join our facebook group for updated info.

Frequently asked questions about practise, is found under FAQ.

At judo practise, you may have contact with your training partner when necessary, if you limit this to a small number of partners. Before/after practice and in breaks, we keep 1 m distance. It is possible to change partners after two days break, but we want to limit this as much as possible.

There are also a number of other measures we take to practice safe judo:

We need to take attendance on all the practices. Fill out this form on every practice you attend. 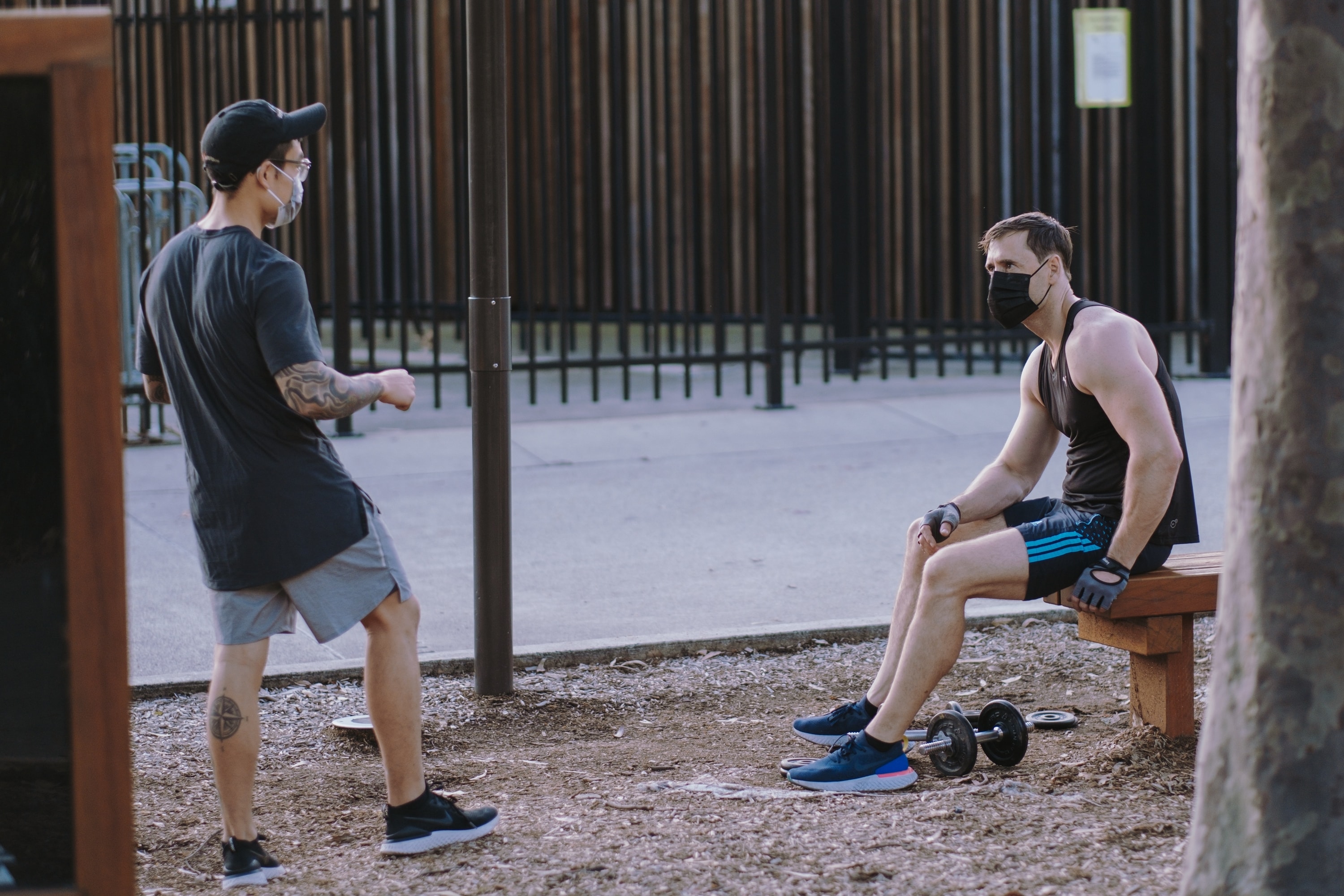 Photo by Kate Trifo from Pexels

National and regional Covid-19 restrictions has lead to the decision that there will be no indoor activities in NTNUI until February 1st. 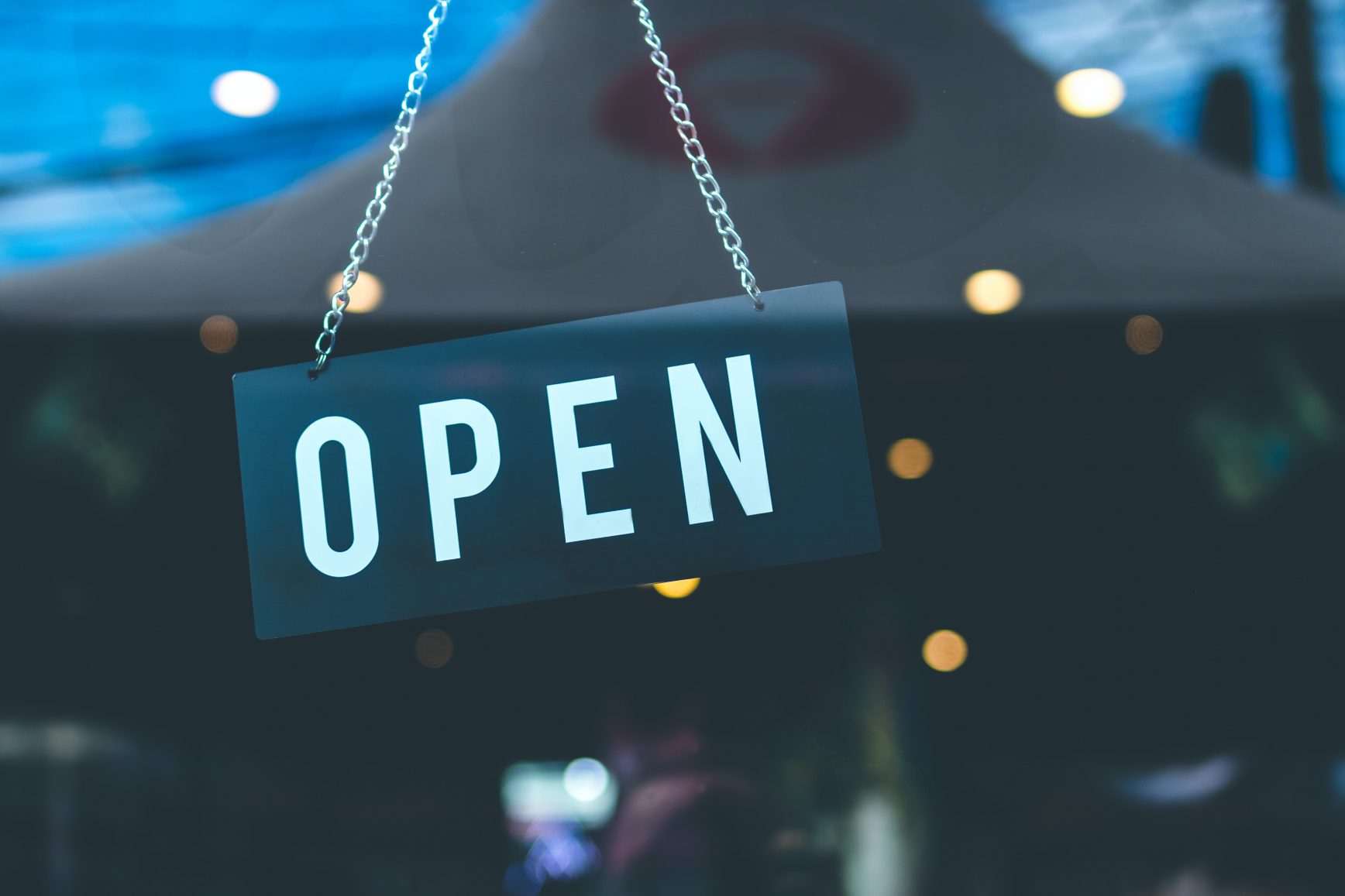 Photo by Artem Beliaikin from Pexels

From October 12th, judo practice will be possible for adults up to 25 years of age. Those aged 26 or older, must wait until phase 2.

The reopening of society depends on people. People need to keep strict rules to keep the number of people infected low. In this post, you will get the information you need before you come to practice.

Practises this fall, are on mondays and thursdays 19:30-21:00 in the dojo at Sit Idrettsbygget Gløshaugen. To enter the gym, you need membership in Sit. Purchase this through the website. After this, you may register in the reception.

At judo practise, you may have contact with your training partner when necessary, if you limit this to a small number of partners. Before/after practice and in breaks, we keep 1 m distance. It is possible to change partners after two days break, but we want to limit this as much as possible.

There are also a number of other measures we take to practice safe judo:

The norwegian sports federation mada a e-learning course, we would like you to take before you come to first practice. It takes 10 minutes. Just do it.

We need to take attendance on all the practices. Fill out this form on every practice you attend.

Note! If you want to use the rest of the gym before/after practice, you have to book a place at sit.no 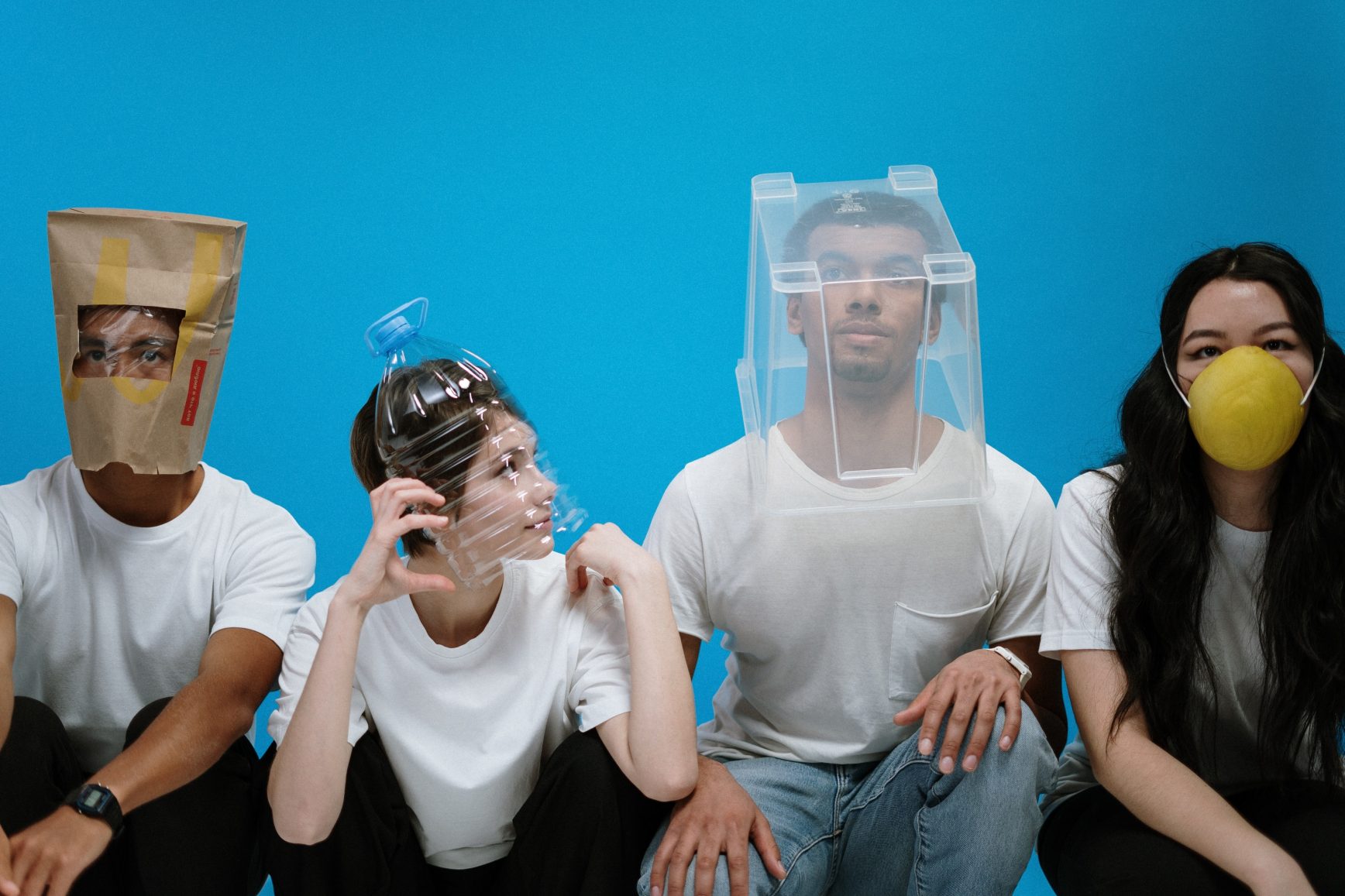 When judo practice opens again, there will be restrictions specific to our sport, mentioned in last post (https://www.judo.no/organisasjon/korona/#).

It would be possible to have alternative practises without any contact, but this would be more general practice. Perhaps this is the time to try out some other great practices at NTNUI, that is included in your membership. Jogging and circuit practice is held by several groups and is free and open to all members.

For now, judo practice is still suspended until further. More information will be given when we have it. Hope both new and old members are ready to do some judo when the authorities gives the ready signal! 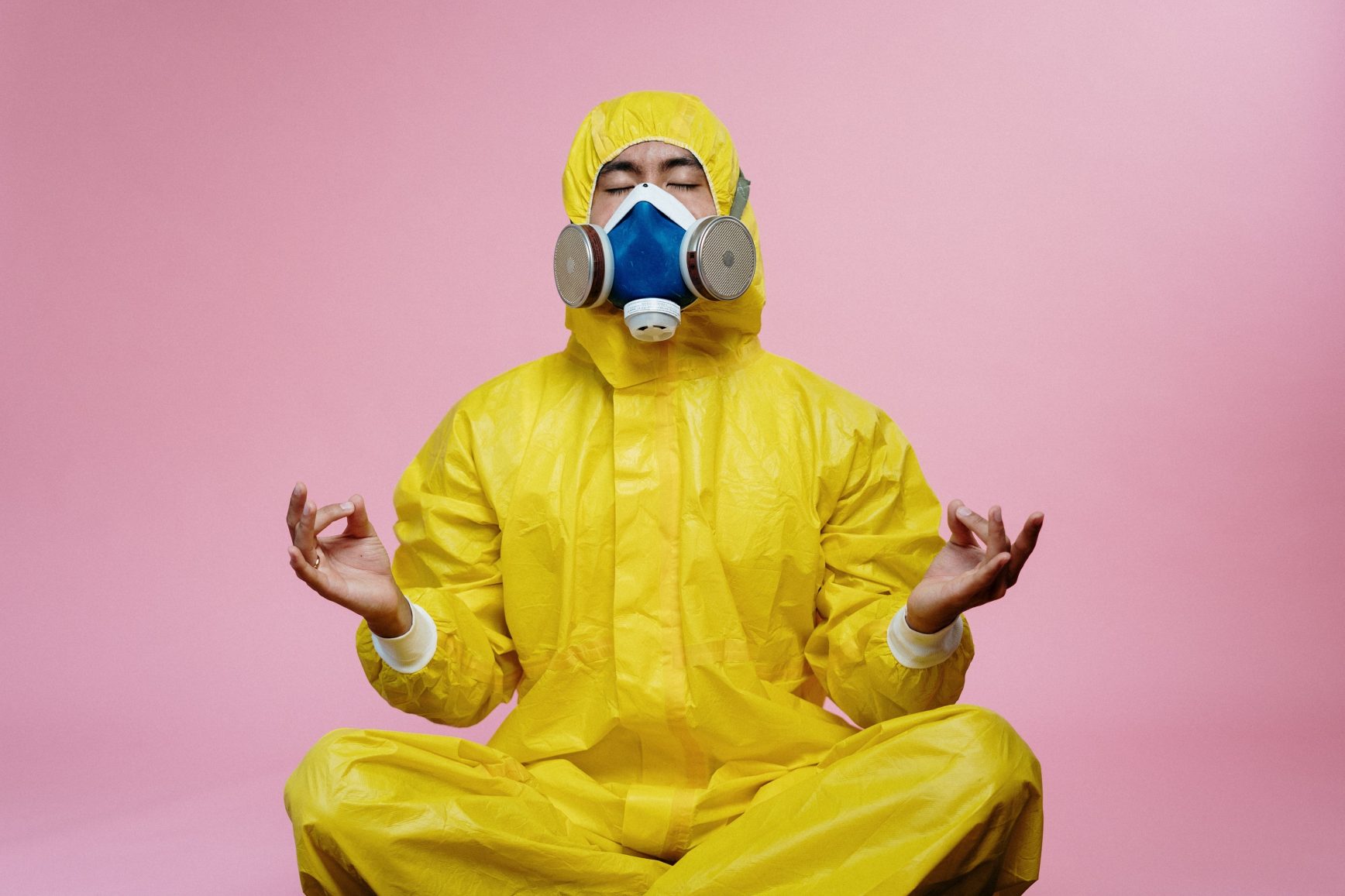 Because of the pandemic and advice from central NTNUI, we decided at practise on march 11th, that practise were to be suspended until further notice. This is now clear will at least be out the semester. The planned grading and competition were also cancelled. We hope to come back stronger, when this is possible.

The government has now opened for judo practice for kids and youth up to 19 years old, because of their low risk of disease. We hope that also us students can be back in the beginning of next semester.

The advice from the authorities so far are: 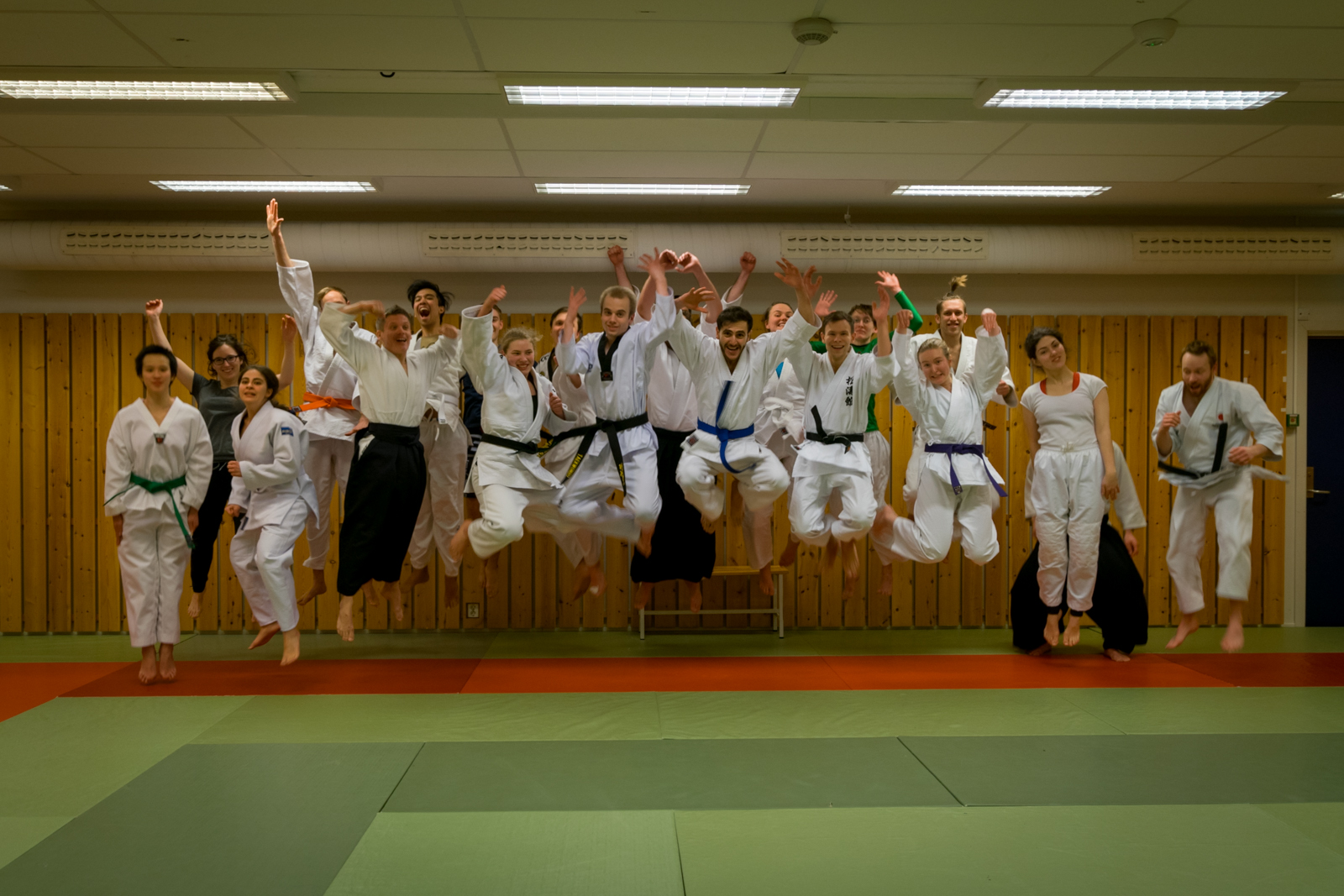 Saturday the 15th of february, it was time for our annual martial art exchange seminar at Dragvoll, with five different martial arts in five hours. 23 partisipants from the judo-, jujitsu-, karate-, aikido- and taekwondo groups was gathered for the third year in a row. It is officially a tradition!

The karate guys started the show with a thorough warm up with Torbjørn, and a demonstration of kata with Helgi. The techniques we were thought thereafter, all came from the different elements of the kata.

Several, if not all of the japanese and korean martial arts, have something in common as well as complimenting each other. Karate procured the hits and punches of the day.

A kata describes a detailed pattern of movements one performes either alone, or in groups in different japanese arts (there is also a korean equivalent). In judo, we perform kata for dan graduation, that is black belt and up.

After that, it was jujitsu’s turn. They have joined a seminar we had for the coaches before we started having the seminar of today, but it was the first time they actually joined the resulting martial art seminar.

The psychology student Ola, gave us a deep walkthrough of arm bars and chokes, with emphasis on what we call ude-garami in japanese or entangled/braided arm lock in english.

After lunch, Wolfgang from aikido got us started up pracising with a bokken, which litterally mean wooden sword. This was then the weaponized part of the seminar.

Firstly, we learned basic cuts individually, before we went together in pairs to test different attacks and counters.

Then taekwondo was next up, which is a korean martial art. These guy (and gals) are specialists in kicking and practise balance, accuracy and flexibility a lot.

No surprise, it was sensei Sverre from taekwondo that was going to be responsible for the streching towards the end of the seminar. We kicked both with the front leg and back leg and combined these as we got used to it.

In the fifth hour, it was judo’s turn to show what we’ve got with sensei Georg running point. After a judo specific warm up with falling techniques, we went straight on to throws to complete the circle with all the different main aspects of martial arts: striking, kicking throwing, weapons and newaza submissions.

The only thing missing now, was of course some actual fighting. Even if not everyone was completely convinced that throws are the salvation in this brief introduction, everyone joined in, fighting bravely in tachi-waza and ne-waza, which was common to the jujitsu part.

After a long day of practise, lunch, practice again and a group photo, it was due for some stretching lead by Sverre.

But the fun was not over yet. After some Sauna, we were invited home to Wolfgang and Victoria from aikido, where we ordered lots of pizza. A couple of beers, good mood and loud card games was unevitable from these competitive people. The afterparty was a nice touch to this years seminar, even if we had already had been seven hours at Dragvoll, some of us stayed for six more. Almost everyone joined, so we must conclude that everyone had a great time! 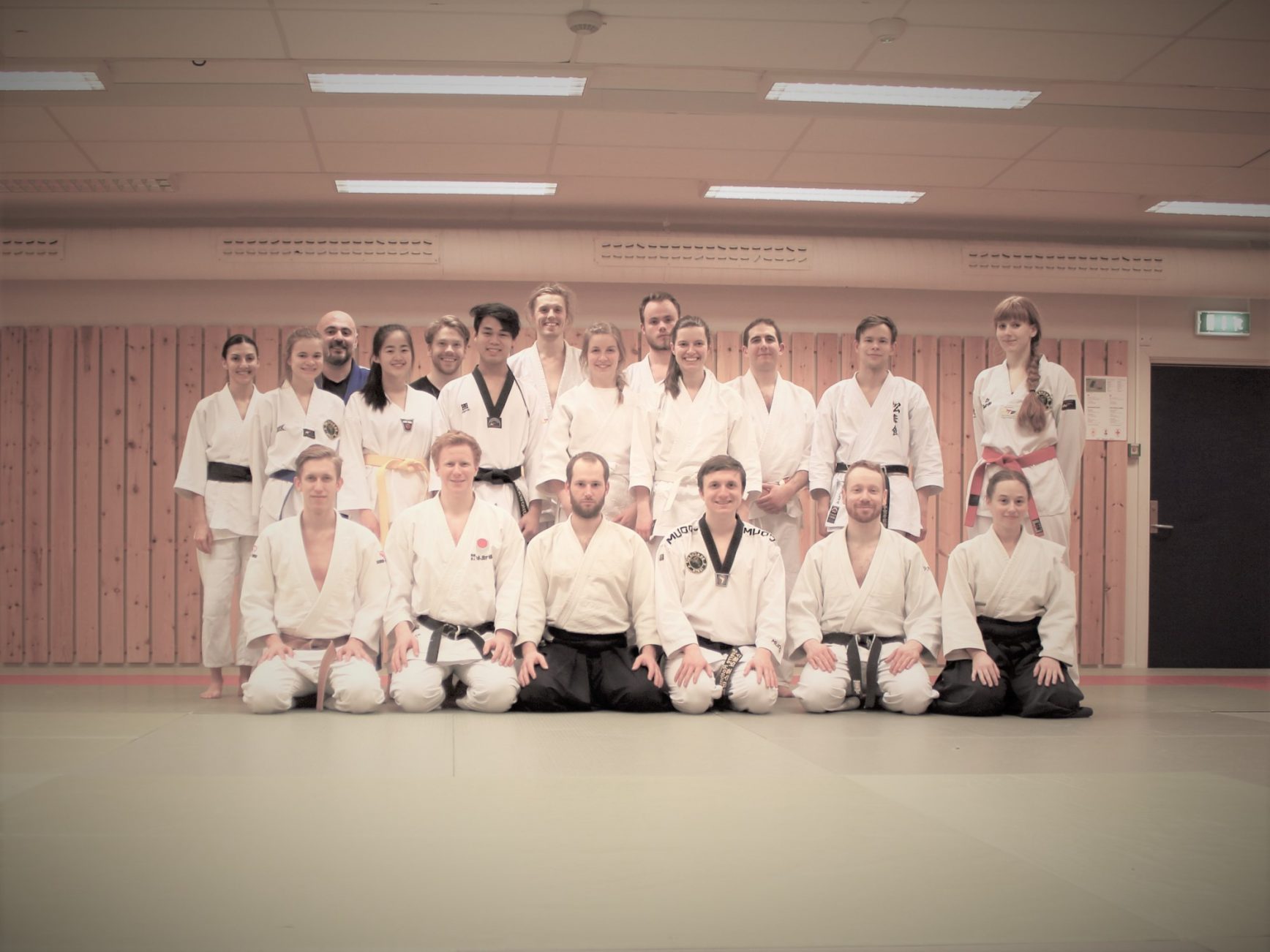 The seminar will have one hour of each of the represented martial arts. This includes breaks every hour. In addition we will have a simple norwegian bread lunch at NTNU campus Dragvoll. To cover this cost, we take a small fee paid here:

Note! There is a limited number of places for each group, so sign up with your leader before paying the fee.

The timetable will be as follows:

An afterparty is also in planning. We will come back to what we do with dinner, so that we can go directly from practise, to shower/sauna, to dinner and to party. Save the date! 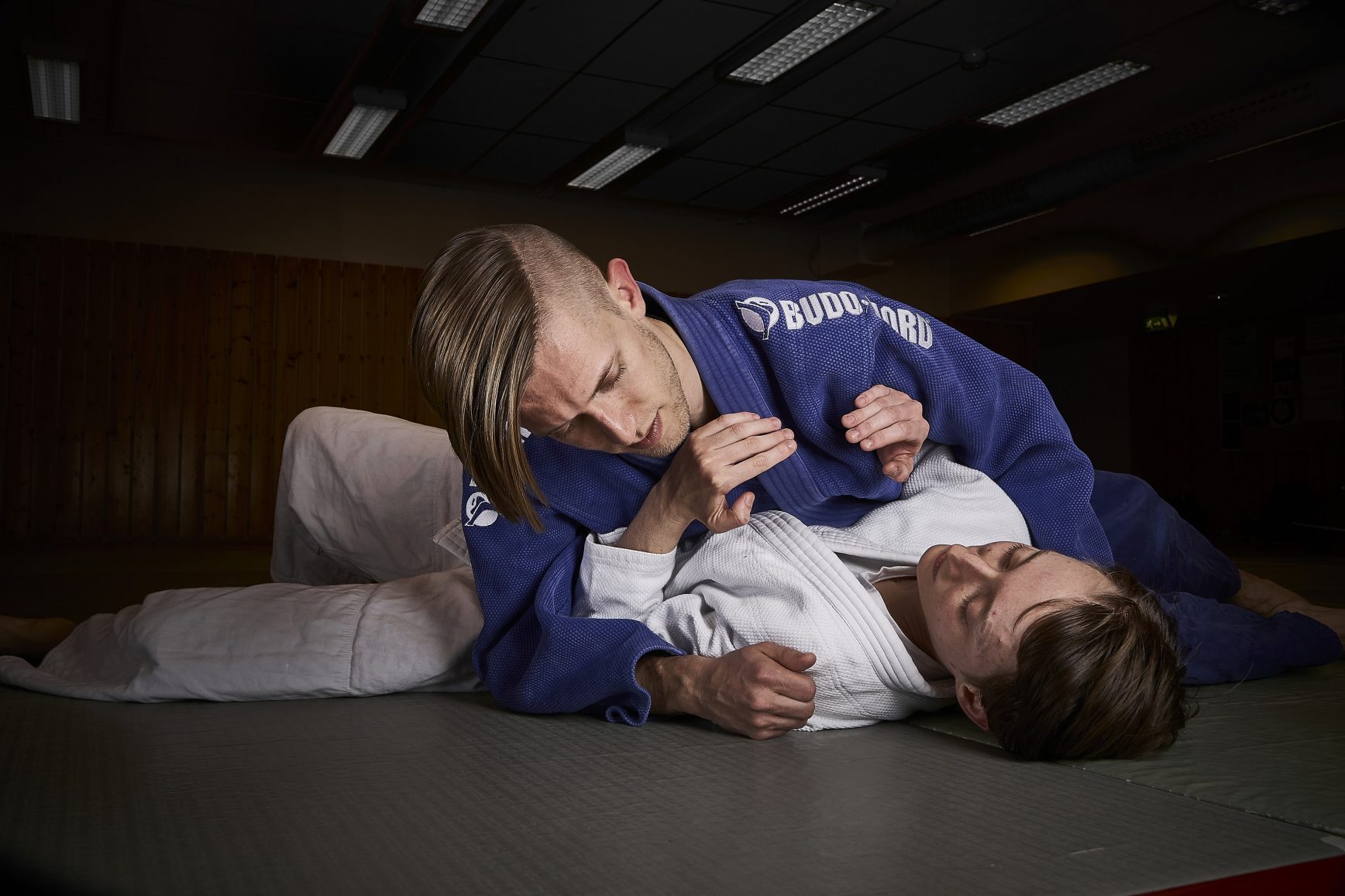 The new semester is here on monday 6th of january and we are back the same day. As mentioned in our Facebook group, it will be free entrance at the gym until the 19th. I.e. the first two weeks of the semester. I hope to see many new and old faces at these first practises. In this period, we emphasise on the basics of judo, giving the new recruits a chance to catch up. If you do not have judo clothes (judogi) or similar, just use normal gymwear. Welcome!

Practise hours are as before:

From monday 20th, you will need to get the gym membership to continue practising with us. If you want more information, you can explore this website, send us a facebook message or an email at judo-leder@ntnui.no 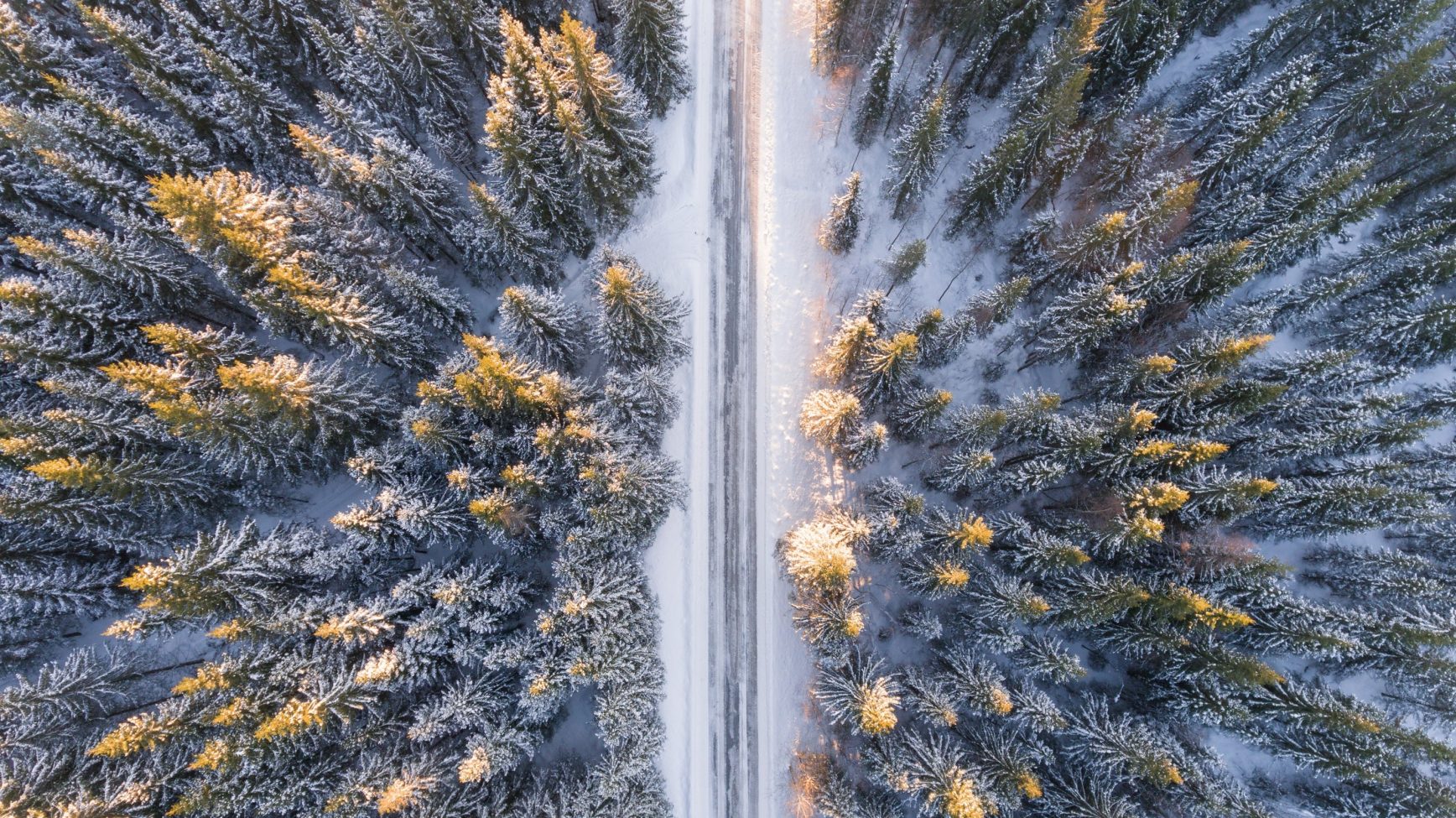 Christmas is coming, and people are finnishing their exams, traveling or going home. We will have this years last official practise on wednesday, because several have said they won’t be here next week.

This has been a great semester, where we started at Dragvoll and got to move to the new and remodelled Gløshaugen idrettssenter. We have participated two recruiting events, made a webshop, mailinglist, gotten a new logo, taken a lot of cool pictures, had social beer, a christmas party and graduation with new yellow and orange belts. Productive!

We will also have a lot of fun next semester, so stay tuned! The Aikido guys have already sterted planning the annual martial art exchange seminar.

Semester start at NTNU is monday 6th of january, and we plan to make the first practise of 2020 on this day. New semester means new members. In the beginning of the semester Sit usually has free entrance, so an excellent opportunity to gain some new recruits. Try judo for free before you decide!

Welcome back, and merry christmas! 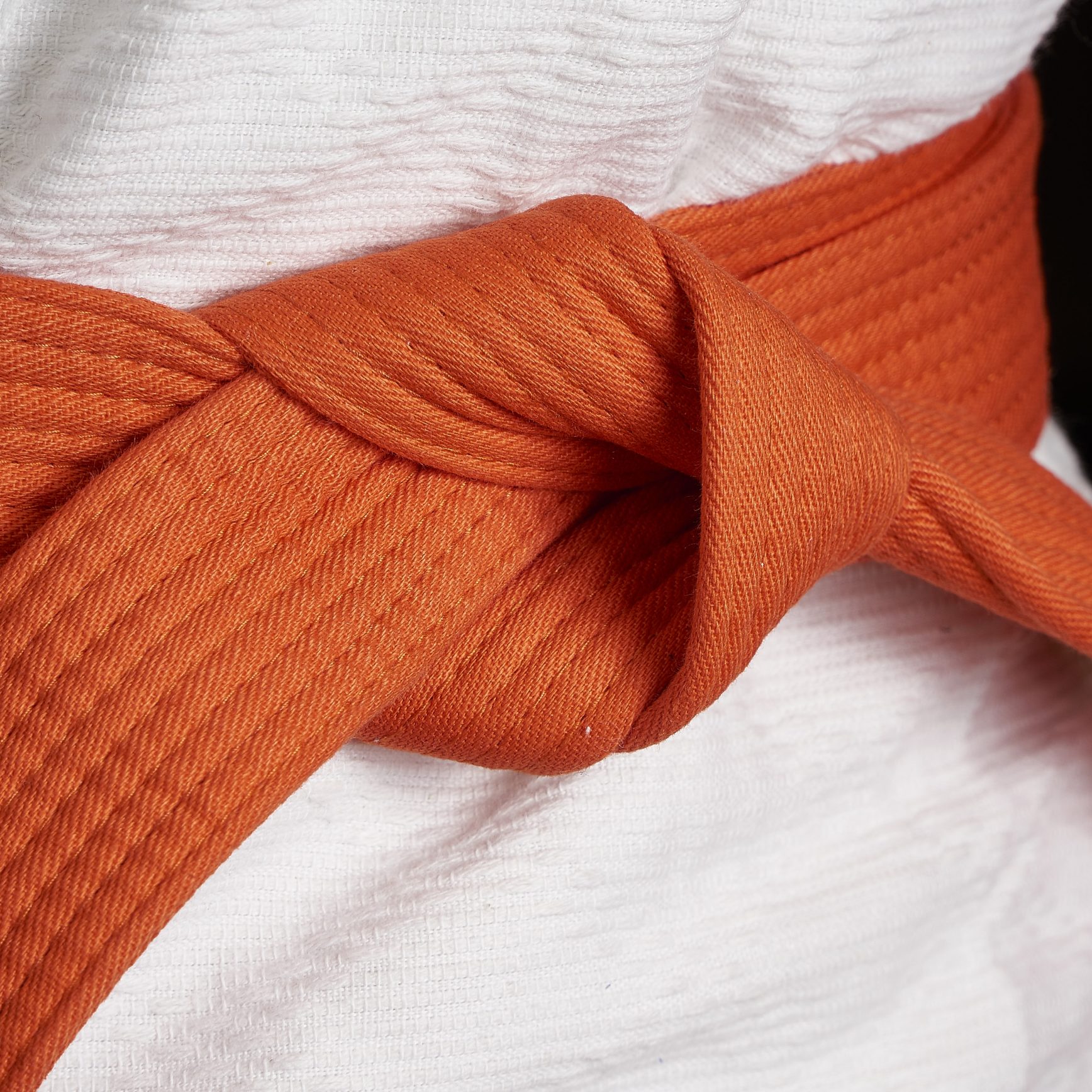 Now we are at the point of the semester where we want to see some new belt colors within our ranks, and next week you will get a chance to move up in the hierarchy, climb the ladder, the thousand steps, you might say.

On monday, I think we can manage to quickly go through the yellow and orange curriculum. This means we have little time, like you often have on exams, and it would be nice if you came prepared.

Luckily, we have the online dojo for you to explore on your own. The curriculum for yellow belt is found here:

This is not scary at all. I am your sensei and know what you can do. You can do it, juDO it, that is. With a new rank you will need a new belt, which you can purchase in the webshop: